Joan Delano Aiken was born in Rye, Sussex, England, on September 4, 1924. Her father, American poet/writer Conrad Aiken, won the 1930 Pulitzer Prize for his Selected Poems. Her mother, Canadian Jessie McDonald Aiken, was also an author. In addition, her stepfather was another writer, Martin Armstrong. Sister Jane Aiken Hodge is also a writer.
Aiken was raised in a rural area and home schooled by her mother until age 12. She then attended Wychwood School in Oxford. Her mother read to her often, and she was influenced by such authors as Thurber, Scott, Dickens, Tolstoy, Austen, the Brontes, Dumas, Mark Twain, Edgar Allen Poe and Rudyard Kipling. Alone much of the time, she spent her time reading and making up stories to amuse herself. When her mother remarried, her half-brother enjoyed her stories also. She would make up stories set in imaginary countries and surroundings (Wilson).
Her first taste of success was in 1941 when the British Broadcasting Corporation broadcast some of her short stories on their Children’s Hour program.
She worked at the BBC, St. Thomas’s Hospital and ten years in the London office of the United Nations, all the while continuing to write stories. She and husband Ronald George Brown married in 1945 and had two children, John Sebastian and Elizabeth Delano Aiken (Wilson).
In 1953 a collection of short fiction called All You’ve Ever Wanted and Other Stories was published. While writing The Wolves of Willoughby Chase, which she began in 1952, her husband became ill and she put the book aside. He died of lung cancer in 1955. After working for five years as a copy editor at Argosy Magazine, and at the J. Walter Thompson Advertising Firm, she returned and finished the book in 1963. The book won the Lewis Carroll Shelf Award. In 1972, her book Night Fall, won America’s Edgar Allen Poe Award for juvenile mystery.
During an interview Aiken once stated, "Why do we want to have alternate worlds? It’s a way of making progress... if you write about something, hopefully you write about something that’s better or more interesting than circumstances as they now are, and that way you hope to make a step towards it" (Locus). She is best known for her adult "fantasy" stories.
Aiken’s hobbies are painting, gardening at her home (which used to be a pub), and spending time with her two children. She presently makes her home in Pentworth, England.
According to Aiken, she began writing at age five when she was given two shillings as a birthday present. She spent them on a writing block and states, "I haven't stopped since" 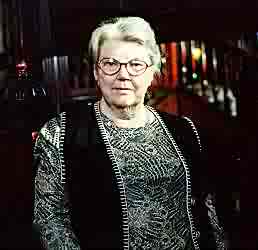