Michael Morpurgo is the author of many books for children, five of which have been made into films. He also writes his own screenplays and libretti for opera. Born in St Albans, Hertfordshire, in 1943, he was evacuated to Cumberland during the last years of the war, then returned to London, moving later to Essex. After a brief and unsuccessful spell in the army, he took up teaching and started to write. He left teaching after ten years in order to set up 'Farms for City Children' with his wife. They have three farms in Devon, Wales and Gloucestershire, open to inner city school children who come to stay and work with the animals. In 1999 this work was publicly recognised when he and his wife were awarded an MBE for services to youth. He is also a father and grandfather, so children have always played a large part in his life. Every year he and his family spend time in the Scilly Isles, the setting for three of his books.
Morpurgo has a gift for magical storytelling, and his books also often tackle social issues. Out of the Ashes (2001), for example, is about the foot and mouth crisis. His most popular books include Why the Whales Came (1985), which was made into a film starring Helen Mirren; King of the Cloud Forests (1988), which won the Cercle D'Or Prix Sorciere (France); and My Friend Walter (1988) and Out of the Ashes (2001), which were both adapted for television. The Wreck of the Zanzibar (1995) won the 1995 Whitbread Children's Book Award.
The Butterfly Lion (1996) draws on the author's own unhappy experiences at boarding school, and is the story of a young boy who rescues an orphaned lion club from the African bush. It won the 1996 Nestlé Smarties Book Prize (Gold Award). Kensuke's Kingdom (1999) tells the tale of a boy who survives on an island after falling from his parents' yacht and learns how to survive with the help of the mysterious Kensuke. This book won the Children's Book Award in 2000. One of his most recent books is Private Peaceful (2003), set during the first world war and telling the story of two brothers, Charlie and Tommo. It won the 2005 Red House Children's Book Award and was shortlisted for the 2004 Whitbread Children's Book Award.
In 2003 Michael Morpurgo became the third Children's Laureate, a scheme he had originally helped to set up with poet Ted Hughes. The Laureateship rewards a lifetime contribution to children's literature and highlights the importance of the role of children's books. Morpurgo firmly believes that 'literature comes before literacy' and wants all children '... to discover and rediscover the secret pleasure that is reading, and to begin to find their voice in their own writing ...' 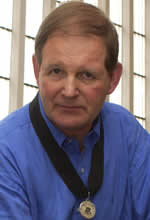